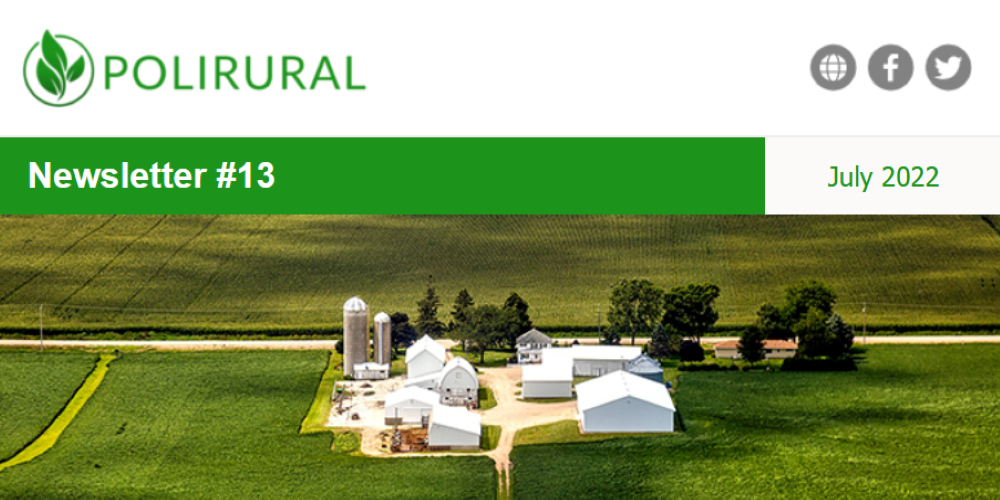 All the new information about the PoliRural Project can be found in the latest Newsletter.

The Rural Pact Conference took place in Brussels on 15 to 16 June 2022. 475 people took part in-person, joined by over 300 participants online. Participants included politicians, including EU MEPs, along with local authorities and social and economic stakeholders from EU, national, regional, and local levels of governance, of which 46% actually live in rural areas.

This conference is of great relevance for the PoliRural project. A basic goal of the project is to demonstrate the possibility of successfully implementing participative policy processes for rural areas, namely Regional Foresight, leading to action and not just reports. The action plans of the twelve participating regions have been aligned with the language and ambition of the LTVRA (Long-Term Vision for Rural Areas). Many of those action plans have already started to take shape. And many of them consists of actions and milestones which could be submitted as part of that region’s commitment to the LTVRA. In others as an important element of the overall Rural Pact. This is an ongoing process and I invite each of the regions taking part in the project to do this immediately by filling out the relevant form on the website of the Rural Pact, and indicating the overall nature of their commitment to:

Within the framework of the PoliRural Project, the twelve pilot regions have drawn up a Regional Action Plan as an important output of the Foresight process. The aim of these plans are proposing solutions to the needs identified in its territory, through a participatory co-creation exercise with the stakeholders of the area.

In June and July 2022, PoliRural organised a series of webinars with the intention of promoting key concepts and results to external stakeholders. These webinars serve as a capacity building resource that can be freely consulted by anyone anytime to learn about the PoliRural approach and how it was implemented in practice.

On 8th June 2022 took place the closing national conference of the Slovak pilot in the heart of the country, in Low Tatras mountainous region, under the title “Let’s unite ourselves for the rural areas – Vision for a more attractive rural areas”. Conclusions in Slovak are available here.

The Monaghan PoliRural pilot Foresight Action Plan aims to achieve Ireland’s highest county-proportion of non-traditional new entrants and young farmers in rural Monaghan by 2030, through locally orchestrated and implemented rural development policies and supports that actively encourage young people, women, and families to move to, or remain in the region.

Latvian Rural Forum initiated discussion as one of events during 8th Conversation Festival LAMPA, which brought together around 19 000 people in Cēsis city in Vidzeme. Discussion was also streamed online.

The rural areas becoming less and less populated – that was the narrative that has dominated Latvia for at least a couple of decades. Finding and buying property in the countryside at the same time has become a real challenge. According to the analyses conducted by Latvian Rural Forum within PoliRural, the unavailability of housing is one of the biggest obstacles faced by those people, who consider moving to the countryside.